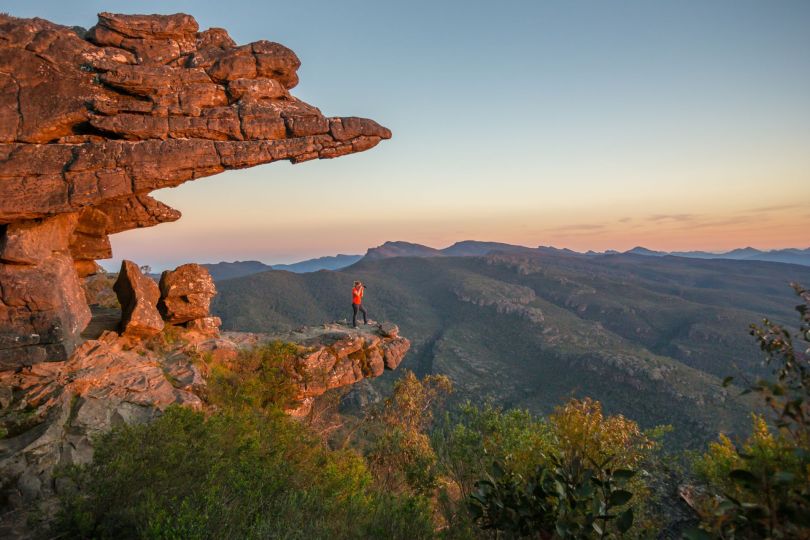 Any holiday Down Under needs hiking on its to-do list and the state of Victoria has some incredible trails on offer. Miranda Luby spent three days in The Grampians National Park

Pausing for breath on the steep ascent to The Pinnacle, my eyes slide over the scene around me. I’m deep in the belly of Australia’s Grand Canyon and, well, it’s aptly named.

Either side of me, ancient walls of weathered sandstone stretch gnarled fingers into a moody sky. Across their looming faces, patches of sun bring pinks and oranges to life while shadows gather where wind and water have gouged deep scars into the rock.

Sounds echo. The air is still. I feel like I’ve gone back in time.

A mere 420 million years ago, I would have been standing on the eastern shoreline of Australian. But now I’m about 700km west of that in one of the country’s most popular hiking and rock climbing spots, a place shaped by forces that shifted sandstone from seafloor to mountain top: The Grampians National Park.

I drive here from Melbourne the day before (a three-hour journey), navigating by the range of mountains that rise abruptly from the surrounding Western Plains and finding my way to Halls Gap, a tiny Victorian town known as the gateway to The Grampians (or Gariwerd as it is called in the local Aboriginal language).

Here I meet my two guides and group of fellow adventurers for our three-day taste of some of the many hiking trails in the 160,000-hectare park. And while the sandstone walls that edge the town are impressive, it’s the smell the stuns me as I step out of the car. Wildflowers.

“There are almost 1000 separate plant species in The Grampians,” Richard, a guide, tells me, whipping out a laminated wildflower guide dotted with beautifully-named blooms such as everlasting paper daisies, blue pincushions, and totem poles. “It’s got the biggest variety in Victoria.”

As the sweet scent mixes with the earthy smell of approaching rain - the forecast says we’re due for some hot and stormy weather - we fill out packs with scroggin (Australia’s name for trail mix) and set off for our first hike, the short but steep Beronia Peak Walk.

If there’s one thing you can bet on at the beginning of a guided Australian bush hike, especially in Spring, it’s ‘the snake talk’.

“If we do see one,” Nathan, our second guide, tells us as we follow the track from the carpark across Fyans Creek Footbridge and begin the steady climb, “it will be venomous.”

But I tune out for the instructions I know by heart (back away slowly and all that) as we enter a world of Messmate forest, Australian pines and native cherry trees. The twisting branches and muted grey-green leaves of the eucalypts provide welcome relief from the sun as we skirt sandstone boulders and emu droppings, pausing to take in the beauty of some irregular rock formations. Bird calls, our muffled footfalls on the sandy ground, and the rustle of shingle back lizards scampering before us are the only sound in the otherwise quiet bush.

After a few hours of profuse sweating and a short but challenging rocky scramble up to the summit, Lake Fyans and Fyans Valley reveal themselves. I hear a few hushed ‘wows’ through the group’s panting. From the nearby craggy peaks of other mountains to the distant horizon, the view is worth the climb.

That night brings the predicted thunderstorms, sunset giving the incoming front an apocalyptic orange glow as kangaroos on the grounds of Meringa Springs Lodges scatter before the rumble of thunder.

In 2011, Richard tells us, 200 milliliters of rain fell in a few hours overnight, causing 200 land slips across The Grampians with six metres of soil and rocks as big as 4WDs landing on the roads.

“It’s a good example of how fragile a sandstone environment is,” he explains.

Although it’s not just rain that can ravage this landscape. The Grampians has a reputation for big scale bushfires with about three majorly destructive fires a decade, resulting in loss of habitat and, sometimes, human life.

The next day’s hike begins at the Wonderland Carpark and takes in some stunning sights on the steep ascent to one of the national park’s most popular lookouts. While it’s a fairly strenuous climb with some rock scrambling and boulder hoping, the path is very well maintained (it even includes some steps) and there’s plenty to keep your mind off the stitch in your side.

On the way up, we travel through the Grand Canyon, pause for breath in the ‘Cool Chamber’ (a small cave to temporarily tuck yourself away in on a hot day) and wet our faces at Bridal Veil Falls before squeezing through Silent Street, a narrow pass between towering sandstone walls.

Near the top, a steep slope of rock could be mistaken for a cooled and cracked lava flow due to the black lichen and general dull weathering covering much of the sandstone. Patches where an outer layer has been sheered away reveal the startling pink, orange and red rock beneath, like grazes on the slope’s giant knee.

The view from The Pinnacle is as impressive as it sounds like it might be, stretching from Halls Gap and Lake Bellfield to the horizon over a vast expanse of western Victoria. For the risk-adverse (or those just plain smarter than me), a railing keeps you safe as you stand on the edge of the rocky outcrop’s near-sheer face. I can’t help but shuffle myself out to a clifftop a short distance from the railing and feel the adrenalin kick in as I watch the currawongs swoop through the air below.

We take a different route on the way down, descending through eucalypts and explosions of wildflowers, and past reddish rock formations stained in streaks by water runoff. The path alternates between a gentle slope, steps and steep, uneven bush floor. In these latter sections, I have to remind myself to keep looking up as there’s still plenty of view to take in.

Given the sweltering weather, we couldn’t pick a better place to stop for lunch than the Venus Baths. Nestled within lush flora, the small, freshwater waterholes are an oasis for hikers. I pull off my boots and slip my toes into the cool water as I tuck into a sandwich and look around. Here, like so many areas in The Grampians, bright green new growth shoots from the black, seemingly-dead trunks of trees burnt in previous years’ bush fires.

After lunch we make our way along Stoney Creek, where the flowers of scented paperbark trees fill the air with the smell of honey, and past a bare, rocky slab of a slope called the Elephant’s Hide. I don’t have to ask why it’s named so. The dark grey rock is crinkled and worn.

We emerge, sticky with sweat despite cooling off at the baths, back where we started at the Wonderland Carpark, making it the perfect 10km loop for a half-day of hiking.

But before calling it a day, we decide to stop off at The Ngamadjidj Shelter (Cave of Ghosts) to see some Aboriginal rock art.

“The Grampians is home to 60 percent of the Aboriginal rock art in the state, but only five sites are open to the public,” Richard tells me.

A short walk from the Stapylton Camp Site leads to the shelter which features white-painted figures likely made with Kaolin clay mixed with water. It’s not known how old these paintings are, however Aboriginal people have lived in Victoria for more than 40,000 years.

Our destination for our final day of hiking is MacKenzie Falls. An easy to middle grade few-kilometer walk along MacKenzie River from Zumsteins Picnic Area leads to the iconic falls where water cascades over huge cliffs into a deep pool, sending fine sprays of rainbow mist high into the air above a stunning gorge.

This hike is the recommended trail to keep your eye out for platypus. Although I didn’t spot any of the notoriously shy creatures, a tortoise disguised as a mossy rock couldn’t escape the keen eye of a member of our group.

Emerging footsore and sunburnt from the falls trail, I’m more than happy for my final adventure in the national park to be seated. The helicopter takes off from our lunch spot at the Grampians Organic Olive Grove and cruises over the rugged Roses Gap, the town of Halls Gap and MacKenzie Falls. The stratification in the mountainsides stands out like rake lines through sand while white water on the rivers appear as puffs of cloud.

From the air, The Grampians opens up like a living map below me and I get a final sense of the sheer size of this place. Its grandeur. And there’s no question: this is one of Australia’s great hiking destinations.

How to get there: Flights from the UK to Australia leave daily and range in price. The Grampians National Park is a three-hour drive from the foodie and cultural city of Melbourne. Getting to Halls Gap from Melbourne using public transport requires the use of both train and bus services.

When to go: With the right clothing, The Grampians can be hiked all year round, although summer can get very hot and bushfire is a risk. In spring, the wildflowers are a great attraction while in winter there is less chance of encountering snakes and the waterfalls are spectacular.

Where to stay: Halls Gap has great food and accommodation suitable for any price range and is the perfect base for The Grampians hiking trails. For a bit of luxury, check out the Meringa Springs Lodges. There are also plenty of camping grounds available.

How to hike in The Grampians: With a good map, hiking the many Grampians trails is simple – the biggest challenge is choosing which one to take. You can also join a tour (Life’s an Adventure is a good choice) that leaves from Melbourne and gives you the highlights.