This article was published in Australian Geographic Magazine 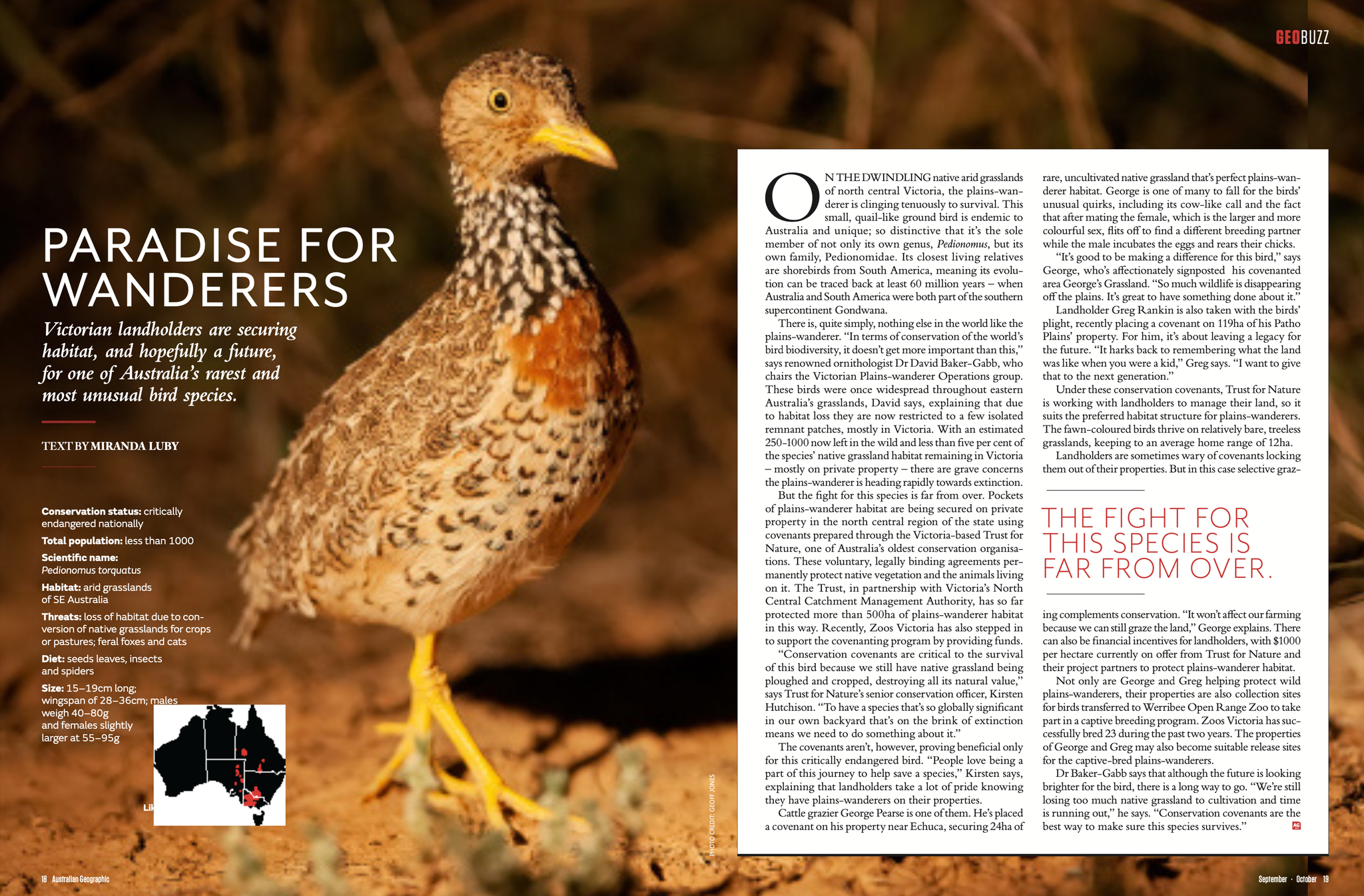 Victorian landholders are securing habitat, and hopefully a future, for one of Australia’s rarest and most unusual birds.

On the dwindling native arid grasslands of north central Victoria, the plains-wanderer is clinging tenuously to survival. This unique species - a small, quail-like ground bird endemic to Australia – is so distinctive that it’s the sole member of not only its own genus, Pedionomus, but its own family, Pedionomidae. Its closest surviving relatives are the seedsnipes from South American, meaning its evolution can be traced back at least 60 million years to when the land masses of Australia and South America were last directly linked, as part of the southern supercontinent Gondwana.

Put simply, there is nothing else in the world like the plains-wanderer.

“In terms of conservation of the world’s bird biodiversity, it doesn’t get more important than this,” explains renowned ornithologist Dr David Baker-Gabb, who chairs the Victorian Plains-wanderer Operations group. These birds were once widespread throughout the grasslands of eastern Australia, David says, explaining that due to habitat loss, they are now restricted to a few isolated remnant patches, mostly in Victoria. With an estimated 250-1000 now left in the wild and less than five per cent of the species’ native grassland habitat remaining in Victoria – mostly on private property – there are grave concerns about the survival of the plains-wanderer.

The fight for the species, however, is far from over.

Pockets of plains-wanderer paradise are being secured on private property in the north central region of the state using covenants prepared through Victoria-based Trust for Nature, one of Australia’s oldest conservation organisations. These are voluntary, legally binding agreements that permanently protect native vegetation and the animals living on it.

The Trust, in partnership with the North Central Catchment Management Authority, has so far protected more than 500ha of plains-wanderer habitat in this way. Recently, Zoos Victoria has also supported the covenanting program by funding financial incentives for covenants.

“To have a species that’s so globally significant in our own backyard that’s on the brink of extinction means we need to do something about it,” says Trust for Nature’s senior conservation officer Kirsten Hutchison. “Conservation covenants are critical to the survival of this bird because we still have native grassland being ploughed and cropped, destroying all its natural value.”

The conservation covenants aren’t, however, proving to be beneficial only for this critically endangered species. Kirsten says landholders take a lot of pride knowing they have plains-wanderers on their property. “People love being a part of this journey to help save a species,” she says.

Cattle grazier George Pearse will soon be one of the latest landholders to place a covenant on his property near Echuca, securing 24ha of rare, uncultivated native grassland that’s perfect plains-wanderer habitat. George is one of many to fall for the birds’ unusual quirks, including its cow-like call and the fact that after mating the female, which is the larger and more colourful sex, flits off to find a different breeding partner while the male incubates their eggs and rears the chicks.

“It’s good to be making a difference for this bird,” George says, who has a personal connection to the project, his covenanted area affectionately signposted George’s Grassland. “So much wildlife is disappearing off the plains. It’s great to have something done about it.”

Landholder Greg Rankin is also taken with the birds’ plight, recently placing a covenant on 119ha of his property on the Patho Plains. For him, it’s about leaving a legacy for the future. “It harks back to remembering what the land was like when you were a kid,” Greg says. “I want to give that to the next generation.”

Under these conservation covenants, Trust for Nature is working with landholders to manage their land, so it suits the preferred habitat structure for plains-wanderers. The fawn-coloured birds thrive on relatively bare, treeless grasslands, keeping to an average home range of 12ha. Some landholders can be wary of covenants locking them out of their properties. But in this case selective grazing complements conservation.

“It won’t affect our farming because we can still graze the land,” George explains. There can also be financial incentives for landholders, with $1000 per hectare currently on offer from Trust for Nature and their project partners to protect plains-wanderer habitat.

Not only do George and Greg help protect wild plains-wanderers, their properties and others like them are also collection sites for birds that are transferred to Werribee Open Range Zoo to take part in a captive breeding program. Zoos Victoria has successfully bred 23 in captivity during the past two years. The properties George and Greg may also become suitable release sites for the captive-bred plains-wanderers.

Dr Baker-Gabb says that while the future is looking brighter for the bird, there is a long way to go. “We’re still losing too much native grassland to cultivation and time is running out,” he says. “Conservation covenants are the best way to make sure this species survives.”